My first involvement with the Society was in 2009 when various celebrations were taking place to mark Samuel Johnson's Tercentenary. These began with a walk from Lichfield to London by Professor Peter Martin and Dr Nicholas Cambridge dressed as Johnson and Garrick. I had joined the party at the start of this walk, and had taken a set of photographs. A little Photoshoppery to disappear a third walker resulted in the image below. I found an appropriate quotation and used it as a centrepiece in my personal project - creating artwork for the day of the historic walk reenactment . This image then became my contribution to the 2009 Transactions as I was asked if it could be used on the back cover.

Transactions is the annual report of the Johnson Society. It includes the annual presidential address and lecture, as well as other papers, book reviews, and news. The 2010 edition was a significant one as it marked 100 years of the Society. I was asked to produce this cover using various documents to show the history involved. 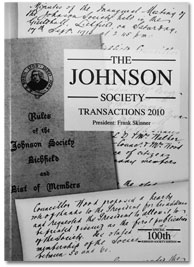 The following year my brief was to redesign the publication completely. I took some photographs of one of the early copies of Dr Johnson's Dictionary of the English Language.

I chose Calisto as the font for the headers with some extra letter spacing when used in capitals. Using capitals for the authors names with upper and lower case for the titles of articles was a design decision to add the feel of Johnson’s original dictionary to the pages. I used Baskerville for the main text of the publication. John Baskerville was a contemporary of Johnson, so his classic font was entirely appropriate. The definition of Transaction as it appears in the early Johnson dictionary is shown below:

To keep a feel of the raised bands and title label on the dictionary spine, I decided to develop the front cover book plate as the main feature for the new cover. My illustration for the content pages represents these features on the first page of each article styled as if they have been printed from woodcuts. 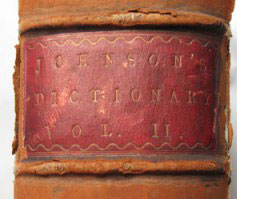 I also took the most appropriate section of the geometric pattern tooled on the back cover of the dictionary and reworked it to be a page divider.

You can see the result in the print work section by following this link. My 2015 design for the membership leaflet and bookmarks then reflected the cover design of the Transactions.